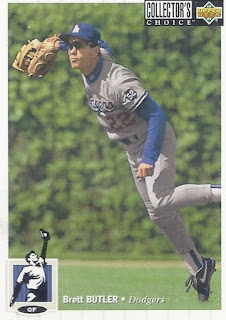 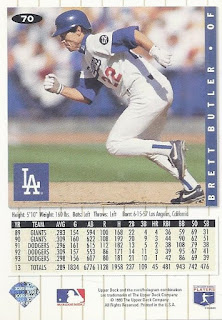 Front photo: Against the Wrigley ivy.

Back photo: Doing the running man.

Better photo?: Close, but the ivy is always a good tie-breaker. Both also give a nice look at the '52' memorial patch for former Dodger Tim Crews.

Ties to my personal collections: Would go on to play for the Mets.

Wiki-facts: In May 1996, Butler learned that he was suffering from squamous cell carcinoma of the tonsils, a type of cancer which only rarely involves the tonsils. (...) he returned to the Dodgers' lineup in September of the same year—defying the predictions of those who had speculated he would never be able to play again.

Google it: 9 out of the 10 results on the first page refer to the comedienne. I don't think the baseball Butler ever allegedly said Walt Disney's last words were "Whatever you do, don't let the Jews get the place."

Birthday boy: June 15, 1957. Nobody in baseball history matches up, although Wade Boggs would arrive in this world exactly one year later. The only person in the *-reference world to share that birthdate with Brett Butler is Frank Pollard, a running back for the Steelers in the 1980s.

Posted by buckstorecards at 05:27