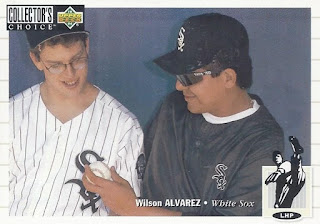 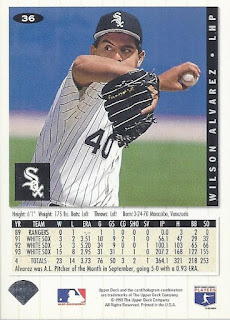 Front photo: I'd call this an autograph shot, but there's no sign of a pen, or ink on the ball. I'll call this more of a "show off a grip" photo.

Better photo?:  The photo on the front is more Collector's Choice-y, so I'll vote for that. It is also the photo so far that could conceivably show up as "Exhibit A" at some point.

Ties to my personal collections: No direct ones, but I still hunted down some of his early Donruss cards. His first game, and his only game of the 1989 season, saw him fail to record an out, and get an ERA of infinity. As for his second start, read on.

Wiki-facts: "Alvarez provided one of the highlights of the 1991 Chicago White Sox season on August 11, by pitching a no-hitter against the Baltimore Orioles at Memorial Stadium in only his second Major League start."

Google it: At the bottom of the first page, you can see this video of a diving catch by Lance Johnson to save that no-hitter. 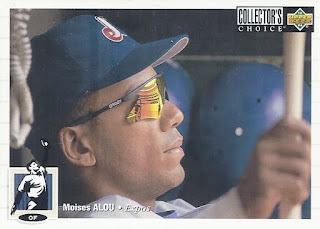 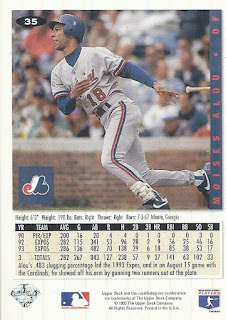 Back photo: Standard at the plate photo, but it is enhanced by the Wrigley bricks.

Better photo?:  It is an easy win for the photo on the front. The only way this could be any better is if the photographer was visible in it.

Ties to my personal collections: Is an Expo and a future Met.

Wiki-facts: "Moises Alou revealed that during baseball season he urinates on his hands to toughen them up." There is nothing I could say that would enhance that sentence, so I'll leave it there in all its glory.

Google it: It isn't until the 10th entry that anything Steve Bartman related comes up, although that is #1 when you search for video. #3 is a nasty injury on the turf at Busch Stadium.

Birthday boy: July 3, 1966. In another tie to my PC, former Ottawa Senator Jarmo Kekalainen was also born that date. Neil O'Donnell, who played for 13 seasons in the NFL is another 7/3/66 baby.

Posted by buckstorecards at 08:07 No comments: