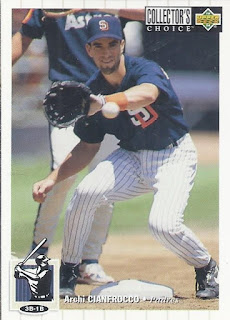 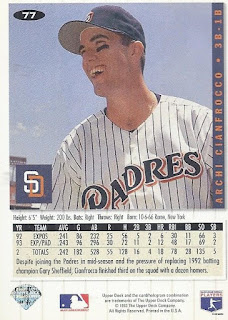 Front photo: Taking the ball at a base.

Better photo?: The front photo is pretty generic, until you look behind him. There's an Astros jersey. And that player looks to have a fielding glove as well. What oddball situation was this from? I don't know, but that's enough to give this to the front image.

Ties to my personal collections: Was a former Montreal Expo.

Wiki-facts: While playing for the Padres, he had multiple fan clubs, including "Archi's Army" and the "CianfrocCrew"

Google it: First video is described as this "Archi Cianfrocco Spits Inside & Outside Batting Helmet! "San Diego Padres"

Birthday boy: October 6, 1966. Only football reference has people that share that birthdate. Those are Walter Wilson, Ken Wilson and Jimmie Johnson. Johnson is neither the more famous coach or auto racer, but he did carve out a 10 year career in the NFL. Wikipedia lists actress Jacqueline Obradors (NYPD Blue) and musician Tommy Stinson as others born that day. 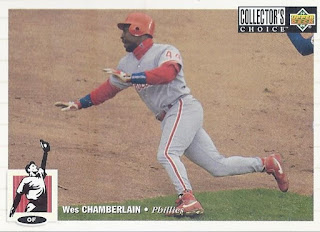 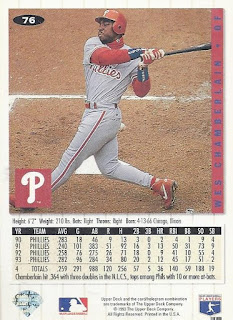 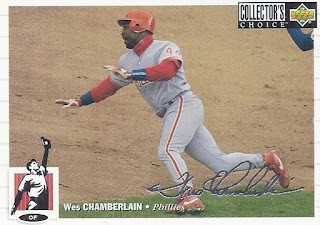 Better photo?: With his feet on the grass while running the bases, that is certainly some CC oddness.

Ties to my personal collections: He signed with the Jays in 1996, but never played for them. Was traded to the Mets as well, but also never played a game for them.

Wiki-facts: "He also played one season in Nippon Professional Baseball for the Chiba Lotte Marines in 1996."

Google it: Nothing really notable on the first page, although his appearance in a World Series video earned him a credit at imdb.

Birthday boy: April 13, 1966. Ken Hodge Jr is the only person listed at *-reference born that date. Marc Ford, formerly of the Black Crowes was also born that date.

Posted by buckstorecards at 09:27 No comments: 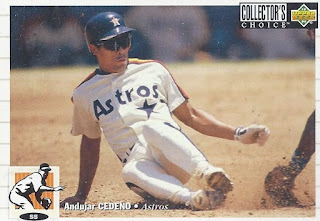 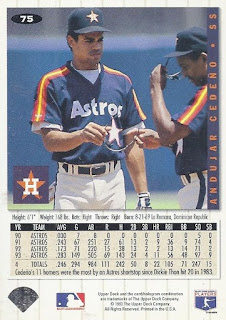 Better photo?: When in doubt, go for the more Collector's Choice-y one. So, the back photo.

Wiki-facts: "His number 10 is in the wall of the center of Estadio Francisco Michelli in his honor. A stadium in La Romana was named after Andújar Cedeño, where they built a statue of him that was placed in the stadium."

Google it: It tried to auto-complete me with Andujar Cedeno Jr, who is playing baseball with Rutgers-Camden.

Birthday boy: I don't do these for players who have passed away. 2 deceased players within a few cards of each other (Ken Caminiti). Both players were part of a multi-player trade that sent both of them to the Padres after the 1994 season.

Up Next: 76 - Wes Chamberlain
Posted by buckstorecards at 08:21 No comments: