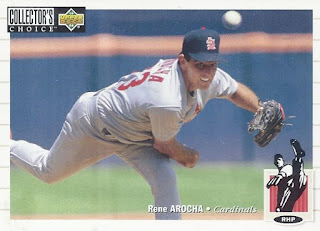 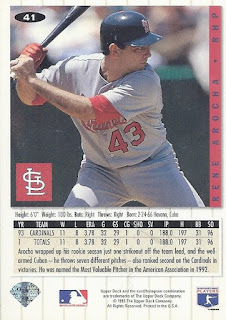 Front photo: That pitch is coming right at you!

Back photo: Pitcher at the plate! Second straight card with that on the inverse.

Better photo?: I really like that front photo, but I can't have two straight cards with a pitcher at the plate on the reverse and not select that as my favourite photo.

Ties to my personal collections: Shared his 1993 Topps rookie card with then-Blue Jays prospect Tim Crabtree. I also like getting cards of players who defected from Cuba, and he's one of them!

Wiki-facts: In 1991, (...) Arocha defected, opting for a life in the United States and the chance at playing in the Major Leagues.

Google it: A pretty interesting article about his popularity when the Marlins hosted the St. Louis Cardinals in 1993.

Birthday boy: February 24, 1966. Rod Brewer was also born that date. The two were teammates in St. Louis over the 1993 season, which is something that probably didn't happen too often in MLB history. Kevin MacDonald, who played one game for the Ottawa Senators in their 1993-94 season, was also born on 2-24-1996. Actor Billy Zane (Titanic) was born that day. And at least one website thinks 2-24-66 was also Ghana's Day of Shame. 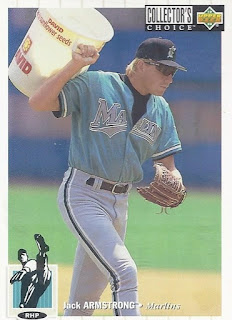 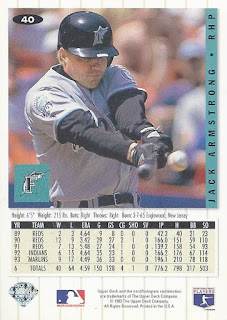 Front photo: Brought to you by the fine folks at David Sunflower Seeds.

Better photo?: This is easily the toughest battle so far, since both photos are not typical and both very Collector's Choice-y. I'll give a very slight nod to the front, since it really is out there in terms of photo choice.

Ties to my personal collections: Shares his name with Toronto Raptors broadcaster Jack Armstrong. That's about it.

Wiki-facts: "A torn rotator cuff helped end his career at the age of 27." Helped isn't really the word I'd opt for.

Google it: Probably more of a google.ca thing, but it takes until the third page for this Jack Armstrong to get a page of his own, not counting the wikipedia disambiguation page. He's lower than someone who is a member of the Canadian Petroleum Hall of Fame, and is sandwiched between some cosmic artist (I don't know or care) and his denial of rape allegations.

Birthday boy: March 7, 1965. Only the NFL has other alumni, but it has an interesting pair of players. Steve Beuerlein, a journeyman QB who picked up a Super Bowl ring as a Dallas Cowboys backup in '92, and the great nickname of Willie "Flipper" Anderson was also born that date. He  picked up a Super Bowl championship in his final game in the league as a member of the Broncos. Going along with the World Series team Armstrong was a part of with the Reds, that's eventual 3 world champion team members born that date. Golfer Jesper Parnevik was also born that day, making it a really good day for future sports stars to be born. 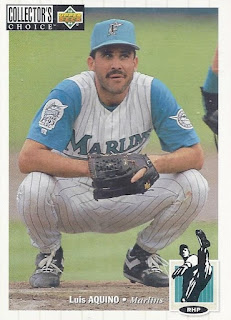 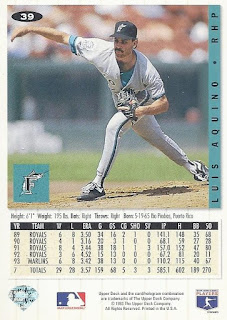 Front photo: A pitcher in a catcher's crouch. I said crOUch.

Better photo?: Both very teal, but the front is more different.

Ties to my personal collections: Made his debut as a Toronto Blue Jay, landing cards in 1987 Topps and Donruss. Was also a Montreal Expo, but never got any cards while in Montreal for 1995.

Wiki-facts: Apparently, he's #80 on the list of the greatest Kansas City Royals of all-time.

Google it: There is a trumpeter by that name as well. That's relevant, since this is what appears when you google "Luis Aquino".

Spoiler alert. They're not the same guy. The second photo is a shot of him as an Expo, looking exactly like someone who'd have to notify the neighbours when he moves to town. I'm no longer mock the Royals or him for being #80 on that list.

Birthday boy: May 19, 1964 via baseball-reference, but 1965 on the card and via wikipedia. Majority rules and I'll say 1965. One season NFLer Troy Stedman was born on that date. 2 season Boston Celtic Michael Smith was also born that day. That's tie #2 to one of my PCs. Outside the sporting world, 1987 Miss Universe Cecilia Bolocco is another 5-19-64 baby.

Posted by buckstorecards at 19:00 No comments: