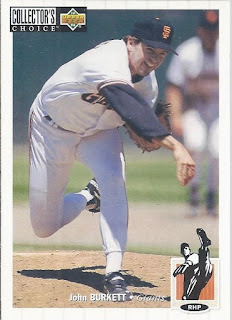 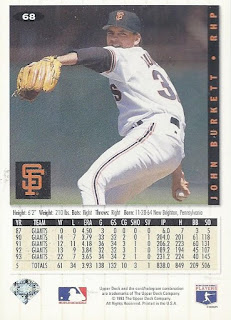 Better photo?: It looks like he's smiling in the front photo, so I'll vote for that one.

Ties to my personal collections: Was once part of a trade that included Ryan Dempster, who makes numerous appearances in my CanCon collection.

Wiki-facts: "Burkett is also a part-time professional bowler, and has 12 perfect games to his credit." His bowling acumen was also featured on a 1992 Pinnacle card.

Google it: His twitter avatar is that 1992 Pinnacle card.

Birthday boy: November 28, 1964. Craig Wilson (the Cardinals guy, not the Pirates early 00's OFer) was born that date. NBAer Roy Tarpley, who sadly had basketball career derailed by drug and alcohol addiction, before his death in Jan 2015 was born that date as well. No NFL or NHLers were born 11/28/64. Outside the sporting world, the Mariner 4 spacecraft was launched on its way to Mars.

Up Next: Jeromy Burnitz
Posted by buckstorecards at 16:43