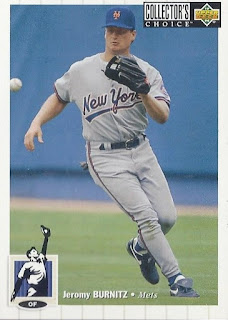 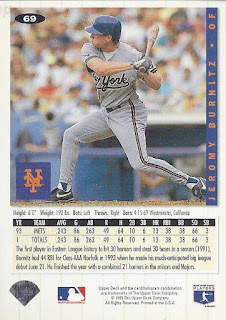 Back photo: At the plate.

Better photo?: A rather bland competition. I guess the relaxed fielding photo is somewhat rarer. 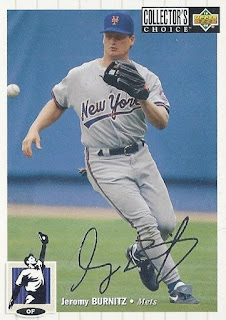 Ties to my personal collections: Is a Met. Had an autograph in a recent Archives Fan Favorites set, but was a Brewer there.

Wiki-facts: During a slump in May 2006, he held an interview in order to apologize for failing to run out a grounder, then joked about the challenges that his team would face during the rest of the season, saying, "I'm your Highest-Paid Free Agent. That, in and of itself, should tell you the big picture that the team's in.". I must say, if it were May and I heard a player on a team say that, it wouldn't inspire me to buy tickets the rest of the way through the season.

Google it: Hit a walk-off homer in the first interleague game at County Stadium in Milwaukee.

Birthday boy: April 15, 1969. No other MLB alum were born that date. In hockey, Jimmy "Let's trade Hasek" Waite was. In the NFL, Mike Jones was born that date. He's best known as the guy who made the game-saving tackle of Kevin Dyson to give the game to the Rams, and is forever immortalized in the famous photo(s) of the Dyson's failed stretch to the end zone.