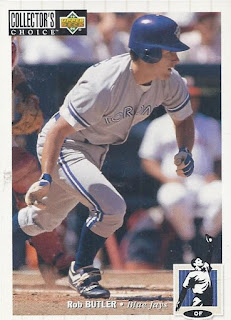 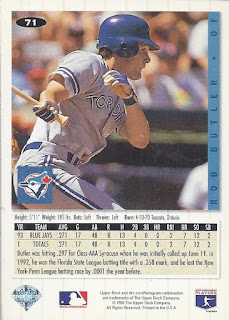 Back photo: The follow-through of a swing.

Better photo?: Nothing too spectacular for back-to-back posts, although both give the vibe of coming from the exact same plate appearance. A slight nod do the front photo.

Ties to my personal collections: Pictured as a Blue Jay - would also fit into my mini-collection of MLB Canadians.

Google it: Runs a baseball academy in Ajax, Ontario. That's just a little bit east down the 401 from Toronto.

Birthday boy: April 10, 1970. That wasn't a good day for Beatles fans, as Paul McCartney left the group, effectively breaking up the band. NFLers J.J. McCleskey and Sean Gilbert were born that date as well. No NBAers were born that date, but NHL tough guy Enrico Ciccone was.

Posted by buckstorecards at 10:17