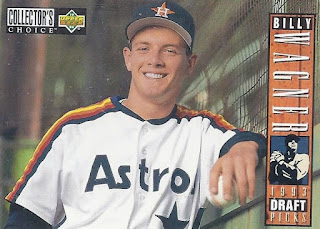 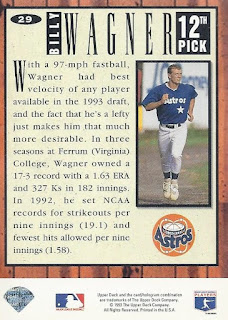 Back photo: Something different, an exercising photo.

Better photo?: Definitely the back photograph. Mainly because I haven't seen a photo like that so far.

Ties to my personal collections: Would go on to become one of many heart-attack inducing closers for the Mets in the 2000s.

Wiki-facts: Nickname was "Billy The Kid". How creative. Is a natural right-hander, but learned to throw lefty after two broken arms as a child.

Birthday boy: July 25, 1971. One of the original Toronto Raptors, Tracy Murray was born that date. Nobody else from the 4 major team sports lines up with that, but actress Chloë Annett (Red Dwarf) and country singer Roger Creager were also born 7-25-71.

Up next: 30 - Matt Drews. Then we move on to the standard base set.
Posted by buckstorecards at 07:50