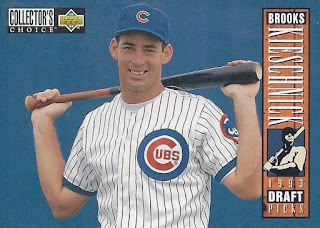 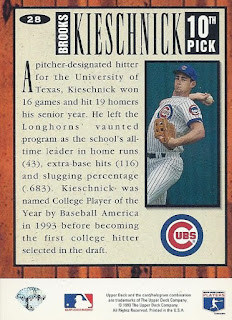 Back photo: Seems cropped way too tightly to be from an actual game. I'll really be glad to work my way out of these staged photos.

Better photo?: The bat over both shoulders is a classic pose, especially horizontally.

Ties to my personal collections: No direct ones, but the fact he both pitched and player outfield later

Wiki-facts: Was one of the inaugural members of the College Baseball Hall of Fame, and has had his number retired by the University of Texas.

Birthday boy: June 6, 1972. One of my favourite names to say in baseball was born that date - Tony Graffanino. A couple short term NBAers, Frankie King and James Scott, were also born that date. A player with a more famous NHL brother in Marko Kiprusoff is a 6-6-72 baby. Outside the pro sports world, Today's Natalie Morales is another one.

It is nice to have a rather busy day in this category.

Posted by buckstorecards at 07:41