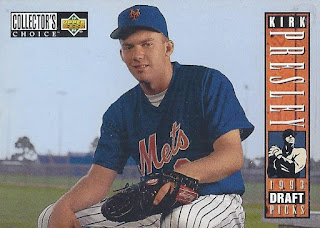 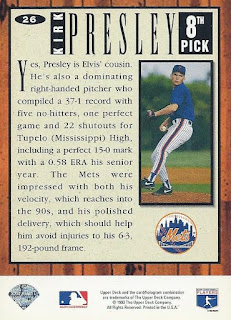 Front photo: A classic photo with a beautiful view of a minor league park in the background.

Better photo?: Not even close. Stadium for the win!

Ties to my personal collections: Is pictured as a Met. I have another card of his in my Mets binder that says was third cousin to Elvis.

Paragraphs in wikipedia entry: N/A. Doesn't have one. Did have an article in People though. That's probably the first for someone from this set.

Google it: There's a lawyer in Kansas City named Kirk Presley whose name pops up as well in google searches. Not the same guy, unfortunately.

Birthday boy: April 17, 1975. Nobody at any of the *-reference.com sites has that exact birthday. But, he does match up with a Travis Roy, hockey player who was sadly left a quadriplegic 10 seconds into his first shift at Boston University.

Yegads this is a depressing card.

OK. British politician Heidi Alexander was also born that date. She's still in office, so maybe that counts for something.