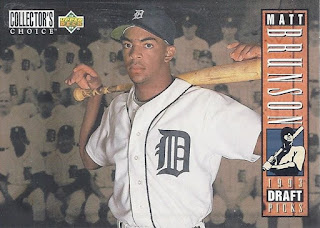 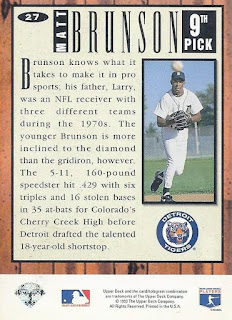 Front photo: A posed photo in front of a team photo interesting.

Back photo: The position of the ball gives a unique look to the staged photo.

Better photo?: The ball makes it closer than it should be. Still, I love that team shot in the background and give it to the photo on the front.

Paragraphs in wikipedia entry: N/A. Doesn't have one.

Google it: You have to go to the second page to find anything about this Matt Brunson. There's a guitarist from the band Crowbar and someone from Creative Loafing Charlotte ahead of him. First link included the term 'bust'. Yikes.

Birthday boy: September 2, 1974. Basketball-reference lists Jason Lawson, who played 17 games with the Orlando Magic as being born that date. And that's it for the *-reference sites. But, wiki gives you an Australian Race Car driver in Steven Johnson, and a star of adult cinema. I'm not giving you the name, you can find out if you so desire.

Up next: 27 - Brooks Kieschnick. And we're finally back to guys who have wiki entries.
Posted by buckstorecards at 17:47