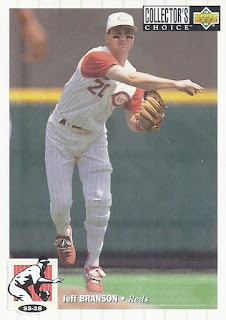 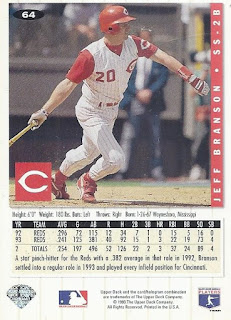 Better photo?: Neither is spectacular, but I'll give the nod to the back for the hint of a sleeve logo.

Wiki-facts: "On November 18, 2013, Branson was named hitting coach of the Pittsburgh Pirates." He's still there.

Google it: The only reference to this Jeff Branson on the first page of results is the link to his baseball-reference page. Most are for a soap opera actor.

Birthday boy: January 26, 1967. The only baseball player born that date is Tim Pugh, who was a teammate of Branson from 1992-1995 in Cinci. Pugh will make his appearance in this set at card #234. Rod Dallman, who played 6 games for the Islanders and Flyers is the NHL representative for that date. No NBA or NFLers were born that date. Col Needham, who founded the Internet Movie Database, was also born that date.

Up Next: #65 George Brett
Posted by buckstorecards at 14:05 No comments: 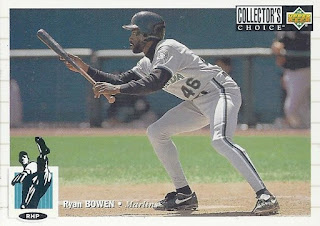 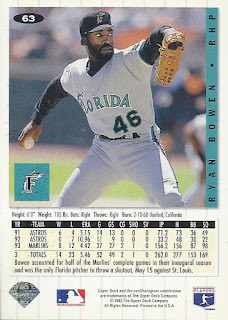