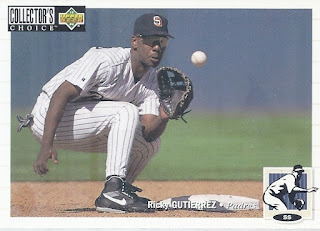 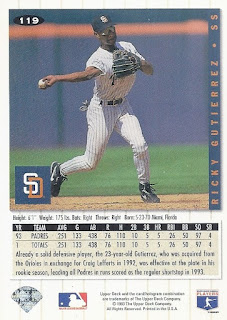 Front: A crouching photo that nicely goes with the horizontal design as he appears to be trying to stop an advancing runner.

Back: Throwing the ball across the infield.

Better Side: The front photo is more unique.

Ties to my personal collections: Spent time with the Mets in 2004, but was released in May of that year. He'd finish the season in Boston, and pick up some jewelry in the process.

Wiki-facts: He was also the only Houston Astros player to get a base hit in Kerry Wood's 20-strikeout game.

Google it: Looks like there's some crypto/youtuber with the same name.

Birthday boy:  May 23, 1970. He looks to be the only person in the *-reference land with that birthdate. Wiki does list Bryan Herta, a race car driver, as that date.

Next up: Juan Guzman

Posted by buckstorecards at 05:43