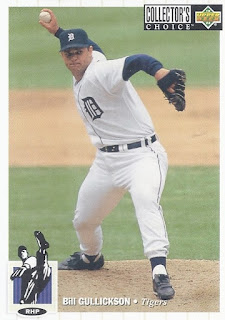 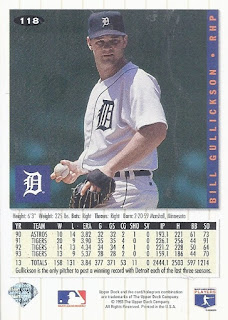 Front: Pitching.
Back: Standing.
Better side: Front. Even if the photo makes it seem feasible that Gullickson threw side-arm.
Ties to my personal collections: Former Expo.
Paragraphs in wikipedia entry: 13 (and a 6 point bullet list with the athletic accomplishments of his children)
Wiki-facts: "When he was in Japan, it was considered a miracle that Gullickson, a patient with type 1 diabetes mellitus, played a professional sport. Since 1998, the Japan Diabetes Mellitus Society (JADMC) has awarded the "Gullickson Award" for the patient who is deemed a superior influence on society."
Google it: Enjoy highlights from his 18 strike-out game.
How was his strike-shortened 1994? Went 4-5 with a 5.93 ERA. Forced to retire after this season due to injury.
Birthday boy: February 20, 1959. The only person in the *-reference world with that birthday other than Bill is former Saints back-up QB Greg Knaflec. Race car driver Scott Brayton was also born that date. 1 year later, Joel "MST3K" Hodgson was born.
Next up: Ricky Gutierrez.
Posted by buckstorecards at 10:24