My first rerun in this, as he appeared on a promotional card I posted back in 2016. 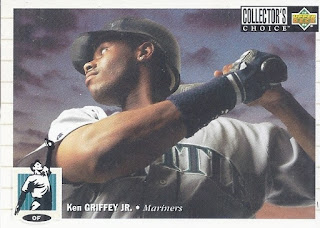 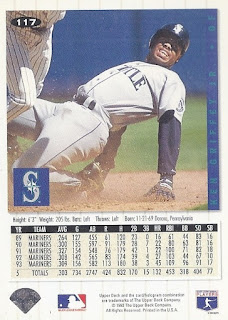 Front: Just an epic looking picture for the time. Now looks like a base card in a set like a base card you'd see in a set like Inception.
Back: Awkwardness on the base paths.
Better side: Front. Easily.
(cut/paste from Promo card #50, I don't really feel like counting wiki paragraphs again)
Ties to my personal collections: Nothing direct.
Paragraphs in wikipedia entry: 58
Wiki-facts: "Griffey was named an American Public Diplomacy Envoy by then Secretary of State Condoleezza Rice on November 18, 2008."
Google it: Attempted suicide in 1988. Wow.
How was his strike-shortened 1994? Batted .323, with his 40 HR leading the AL.
Birthday boy: November 21, 1969. No other MLBers were born that date. In fact, nobody at any of the reference sites was born that day. Even on wikipedia's November 21st entry, nobody else is listed that date. Strangely appropriate for a player of Griffey's abilities.
Next up: Bill Gullickson
Posted by buckstorecards at 18:21

Email ThisBlogThis!Share to TwitterShare to FacebookShare to Pinterest
Labels: Hall of Fame, Mariners