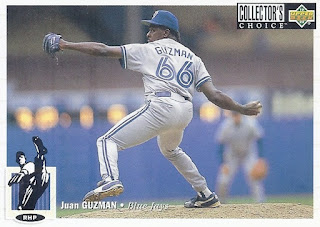 Front: A horizontal shot, with the empty stands at Cleveland's old Municipal Stadium in the background. 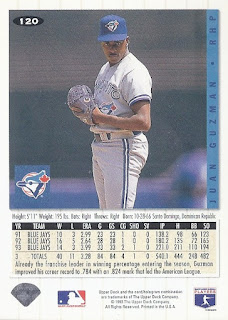 Back: The same, albeit vertically.
Better side: Picking an action shot over a generic standing-around photo is an easy choice.
Ties to my personal collections: He's a Blue Jay!
Paragraphs in wikipedia entry: 6
Wiki-facts: He led the American league in wild pitches in 1993 and 1994.
Google it: Bluebird Banter ranked him the 19th greatest Blue Jay of all-time.
How was his strike-shortened 1994? Went 12-11, but with an ERA of 5.68.
Birthday boy: October 28, 1966. Former MLB infielder Tim Bogar was also born that date. You have to head to football for the big name on that date, with Hall of Famer Steve Atwater coming into the world that date. Hockey has journeyman Benoit Hogue, and outside the sporting world, there's Andy Richter.
Next up: Chris Gwynn
Posted by buckstorecards at 06:35