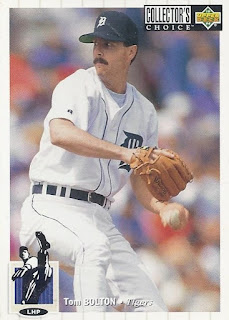 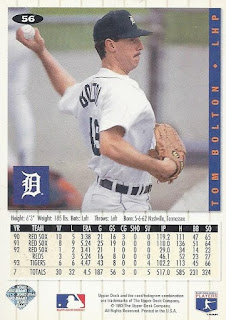 Back photo: Another generic pitching photo.

Wiki-facts: Other wiki Tom Boltons are a clown (4 paragraphs), a British politician (6) and an astronomer (4).

Google it: The only appearance of this Tom Bolton on the first page of Tom Bolton google search results are a link to his baseball-reference page. That's still better than Steve "I'm not the Making of a Murderer guy" Avery.

Birthday boy: May 6, 1962. Dwight Drane, who spent 6 seasons as a DB with the Buffalo Bills was born that date. No ties to my PC though, as Drane had no cards over his career.

Other than coming across other Tom Boltons, that was pretty blah.

Posted by buckstorecards at 19:09