I figured that since zistle lists this as part of the main set, I might as well include it in this. 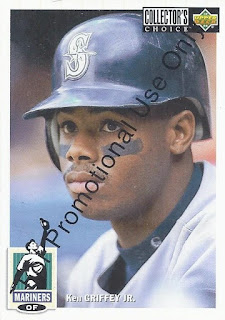 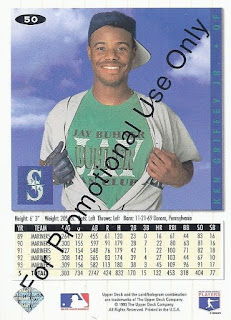 Better photo?: Is it any competition? The back photo wins easily. But, that front photo might be seen again. Probably in 2019 at this rate. I'd love a reason as to why the back card photo was never seen in other portions of the set.

Wiki-facts: "Griffey was named an American Public Diplomacy Envoy by then Secretary of State Condoleezza Rice on November 18, 2008."

Birthday boy: November 21, 1969. No other MLBers were born that date. In fact, nobody at any of the reference sites was born that day. Even on

wikipedia's November 21st entry, nobody else is listed that date. Strangely appropriate for a player of Griffey's abilities.