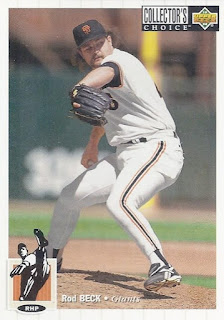 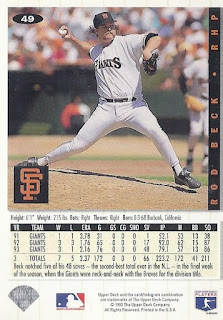 Back photo: The same.

Better photo?: The back of the card is more mullet-tastic than the front, and that's enough for me. 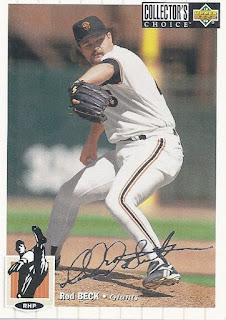 Parallel: Silver signature. There seem to be way more first half loops that you expect in a name like Rod Beck

Ties to my personal collections: See Google it.

Wiki-facts: Was an all-star this season. Googling was far more interesting.

Google it: Helped start a (now annual) AIDS related event, "Until There's a Cure Day" with the Giants. A member of my 2/14 collection, Candice Wiggins, has appeared in ads for this organization. Her father, former MLBer Alan, died of AIDS.

Birthday boy: I won't be doing this portion of the write-up for those that have passed on at the time I write their card up.

Up Next: #50 - Ken Griffey Jr Promotional Card
Posted by buckstorecards at 14:24