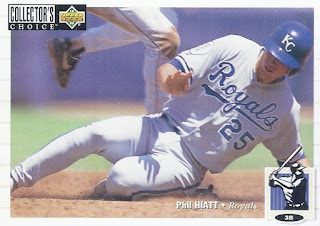 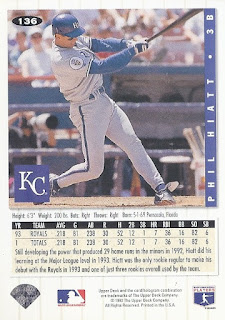 Front: Sliding (and it looks like he's failing to break up a double play)

Better side: It will take a lot to defeat a horizontal photo, and that generic at-the-plate photo isn't going to do it.

Paragraphs in wikipedia entry: 6, although half of them are one sentence.

Wiki-facts: Was named in the Mitchell report.

Google it: There is a professor named Phil Hiatt in one of The Sims games.

How was his strike-shortened 1994?  Was not in the majors.

Birthday boy: May 1, 1969 (nice). Former NBA veteran Billy Owens, who would play in exactly 600 NBA games, mainly with Golden State, was born that day. NHLer Ben Hankinson, who played in 557 fewer NHL games, and is now an agent, is another 5/1/69 baby in the *-reference world. Filmmaker Wes Anderson is the most famous member of that specific date's babies.

Posted by buckstorecards at 07:56

Email ThisBlogThis!Share to TwitterShare to FacebookShare to Pinterest
Labels: Royals