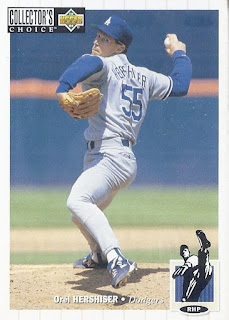 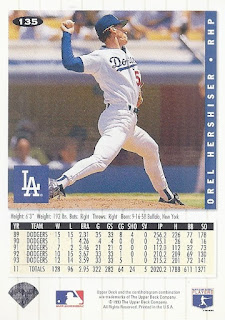 135 - Orel Hershiser
Front: Pitching.
Back: Pitching.
Better side: A repeat battle from last time, but at least there's a rather unique angle on the back. And that is enough to give it to the back.
Ties to my personal collections: He would have one season with the Mets in 1999, and get a few cards with them to end his career in 2000.
Paragraphs in wikipedia entry: 47
Wiki-facts: "Hershiser is the only player to receive the Cy Young Award, the Championship Series MVP Award, and the World Series MVP Award in the same season."
Google it: Also has a profile at Poker Database.
How was his strike-shortened 1994? 6-6 with a 3.79 ERA. Perfectly average.
Birthday boy: September 16, 1958. That's the same as former St. Louis Cardinal Greg LaFleur. That's the football version, not the baseball version. He's the only one in the *-reference world that matches with Orel. But, that is the same date as actress Jennifer Tilly. Jennifer also as a poker database profile.
Next up: 136 - Phil Hiatt
Posted by buckstorecards at 04:47