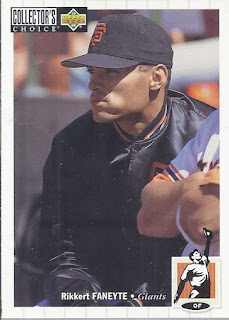 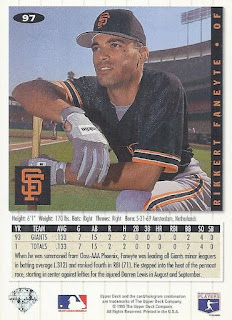 Better photo?: The second has Dodger Stadium visible. While that would be perfect for a Dodger card, it is still OK for a Giants one.

Wiki-facts: "He was a member of the Dutch National Team which finished in fifth position at the 2000 Summer Olympics in Sydney, Australia."

Google it: Had his number retired by the Amsterdam Pirates.

Birthday boy: Born: May 31, 1969. Fellow MLBer Tim Van Egmond was also born that date. Mike Mooney, who played one more game in the NFL than  myself is a 5/31/69 baby. Keith Owens was a little more successful with his NBA career, playing in 20 games for the Lakers. The most successful of the lot was probably NHL enforcer Jeff Odgers, who played 821 games, and spent over 2300 minutes in the sin bin.

Up Next: Jeff Fassero

Posted by buckstorecards at 01:40