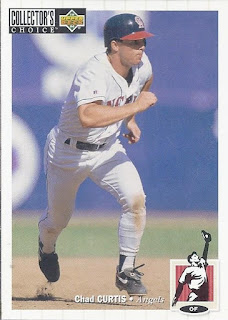 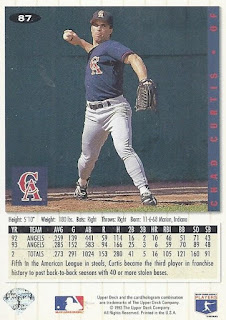 Back photo: It exists.

Ties to my personal collections: Thankfully, none.

Wiki-facts: "Curtis was convicted in 2013 of sexually assaulting three underage girl students while he was a volunteer weight-room strength trainer at Lakewood High School, in Lake Odessa, Michigan, and is serving 7–15 years in prison as a felon."

As for something baseball related:

"In May 1997, after Curtis objected to lyrics of a rap song teammate Kevin Mitchell was playing in the clubhouse, and shut off the clubhouse stereo, he exchanged punches with Mitchell, who threw him over a ping pong table."

Google it: He just lost a 1.8 million dollar lawsuit from one of his student victims.

Birthday boy: November 6, 1968. Actress Kelly Rutherford is lucky enough to share her birth date with him.