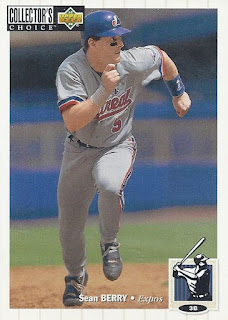 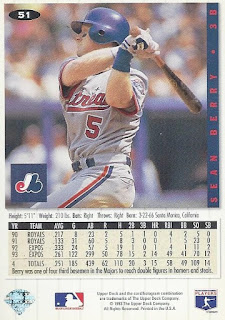 Better photo?: While most running photos with the player running towards the camera have the player staring straight ahead, I really like the sideways glance as the reminder that he has to keep an eye on the batter as well.

Ties to my personal collections: Is an Expo here.

Wiki-facts: "He was a member of the Houston Astros' original "Killer B's", along with Jeff Bagwell, Craig Biggio, and Derek Bell.". Despite the last name, I never would have considered anyone other than Bagwell and Biggio to be Killer B's.

Google it: Despite being fired by Houston in 2010, his coach page with them is still on the front page of google results.

How was his strike-shortened 1994? Respectable. Batted .278 with 11 HR and 41 RBI with the division-leading Expos.

Birthday boy: March 22, 1966. Brian Shaw, who picked up 3 NBA Championship rings as a player, and 2 more as an assistant coach, was born on that date. NFLer Brad Edwards was also born that date, and on a sadder note, so was the late Todd Ewen, a former NHLer and children's book author/illustrator. Depression is a bastard.

Posted by buckstorecards at 15:46