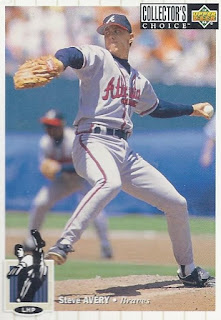 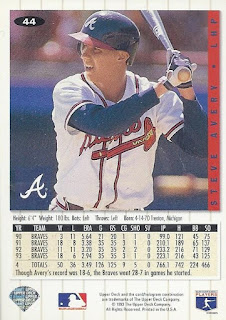 Better photo?: Not even close - PATP!

Ties to my personal collections: He was the starting pitcher in Game 6 of the 1992 World Series - he's got to be referenced on some cards, right?

Paragraphs in wikipedia entry: 14, not counting the disambiguation portion, which includes the always welcome phrase "For the convicted murderer, see Steven Avery."

Wiki-facts: "His final pitch was a double play caused when Paul Konerko lined to Avery and he threw Magglio Ordóñez out before he was able to get back to first base."

Google it: Although images show up on the 2nd page, his only appearance in the Top 50 is a fangraphs link on the third page. Maybe if I'd gotten to this Steve Avery before Netflix got to another one, that would be different.

Birthday boy: April 14, 1970. The only other person at any of the *-reference sites listed as being born that date was former Phoenix Cardinals QB Tony Sacca. Via wikipedia, rapper Redman was also born 4-14-1970, and the Apollo XIII returned to earth on that date.

Email ThisBlogThis!Share to TwitterShare to FacebookShare to Pinterest
Labels: Braves