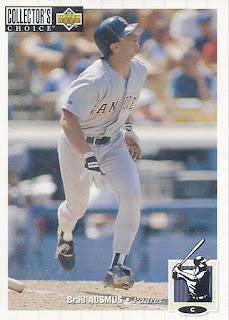 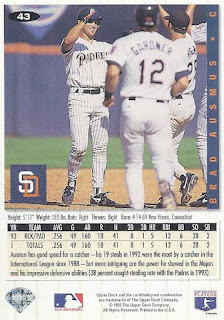 Front photo: Starting down the first base line.

Back photo: Celebrating something.

Better photo?: I always pick the more Collector's Choice-y photo of the two. With that as the decider, this one is an easy win for the back photo.

Ties to my personal collections: Never managed to play for either the Mets or Jays, but was part of trades that included future Mets and Blue Jays with Roger Cedeno, Trever Miller and Jose Lima.

Paragraphs in wikipedia entry: 58 (give or take one or two missed or double counted as I scrolled)

Wiki-facts: His father is a retired professor of European history at Southern Connecticut State University, and the author of A Schopenhauerian Critique of Nietzsche's Thought, which Ausmus calls his "favorite book."

Google it: Another PC tie, since one of the auto-completes is "brad ausmus daniel norris".

Up Next: #44 - Steve Avery. Interestingly, he was born exactly one year later than Brad.
Posted by buckstorecards at 15:47