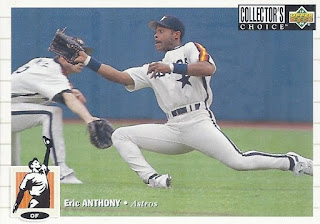 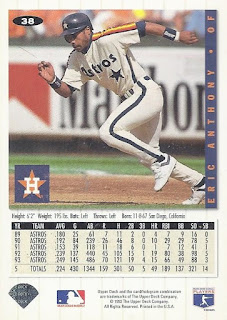 Front photo: A sliding catch, complete with a backup dancer.

Back photo: On the basepaths. There's also a flashback to the presence of cigarette ads on outfield walls.

Better photo?: Everything seems perfectly aligned with the sliding catch, as well as some other Astro helping out just in case he misses it. The Marlboro ad makes the back somewhat of an oddball, but the photo on the front is too nice.

Ties to my personal collections: Was once traded for future Met Mike Hampton.

Wiki-facts: This paragraph might be my favourite one so far.

In 1986 Anthony was an 18-year-old Sharpstown High School dropout working on an assembly line at a Houston plastics company. He talked his way into an Astros tryout in 1986 and impressed scouts with his power (...) Subsequently, he was drafted by the Astros in the 34th round of the 1986 MLB amateur draft.

Google it: There are lots of other Eric Anthonys (Anthonies?) out there. I'll assume the baseball one isn't the musician in Utah.