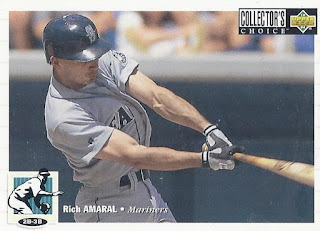 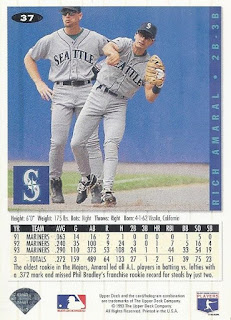 Better photo?: The latter seems most Collector's Choice-y, but the front is a solid choice among a frequent motif. I'll go against my usual grain and opt for for the first one.

Wiki-facts: Amaral's son Beau ... was drafted by the Cincinnati Reds and in 2014 played with High Class-A affiliate in the California League, the Bakersfield Blaze. Beau has autograph cards in 2015 Bowman. His father is referenced on the reverse of his card.

Google it: Has a baseball camp, although the site is hosted by tripod and hasn't been updated since 2013. So maybe "had".

Birthday boy: April 1, 1962. No other *-reference people match up with this April Fool, but he does match up with the current Leader of the British House of Commons, Chris Grayling.