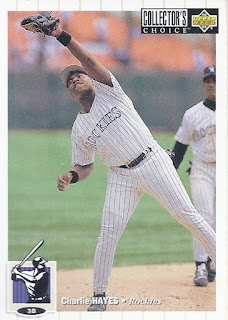 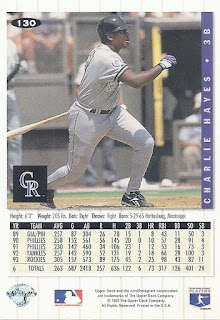 130 - Charlie Hayes
Front: Snagging the ball, although it does look like practice, thanks to the casualness of the player behind him.
Back: Hitting 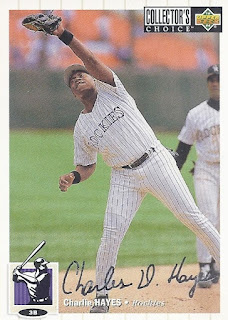 Silver Sig:
Better side: Still the more unique photo is the front one.
Ties to my personal collections: Would sign with the Mets in 2000, but be released during spring training.
Paragraphs in wikipedia entry: 18
Wiki-facts: His son is Ke'Bryan Hayes of the Pirates.
Google it: The Society for American Baseball Research calls him a 'solid journeyman'.
How was his strike-shortened 1994? Batted .288 with 10 HR and 50 RBI.
Birthday boy:  May 29, 1965. Jarmo Myllys, formerly of the San Jose Sharks, was borth that date as well. The day also claims NFLer David Braxton, who mostly played for the Cardinals.
Next up: Rickey Henderson
Posted by buckstorecards at 10:27