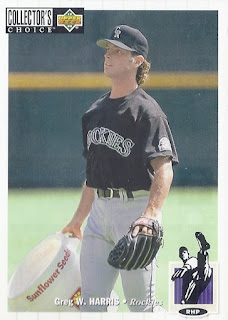 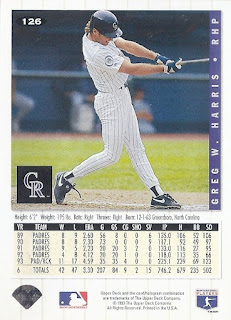 Back: Pitcher at the plate!

Better side: Both are really good and perfect for the Collector's Choice line. Given the fact recent photos of pitchers at the plate will disappear from cards shortly, I'll pick that one.

Paragraphs in wikipedia entry: 5, including one dedicated to botched surgeries and financial mismanagement. The lawsuits seem to have netted him $16,000,000.

Wiki-facts: The 'W' stands for Wade.

Birthday boy:  December 1, 1963. No former MLBers were born that date. There's a rare NBA match, with a former member of the Miami Heat in Billy Thompson. Former Browns/Chiefs center Tom Baugh provides NFL content. The world of short-track speed skating provides a more notable member of the 12/1/63 club with 3-time Olympic medalist and Canadian Sports Hall of Fame member Nathalie Lambert. The list of her medals takes up a full screen at wikipedia. Cricketer Arjuna Ranatunga is another one, and his wiki includes the sentence "he was regarded as one of the fattest cricketers to have played at international level".

Next up: Bryan Harvey

Posted by buckstorecards at 06:51