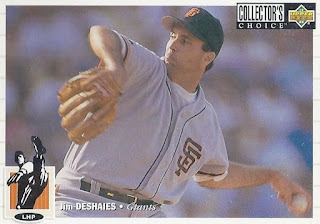 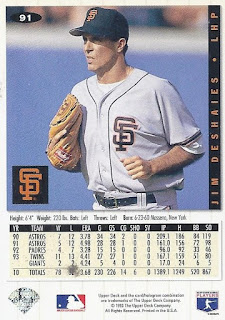 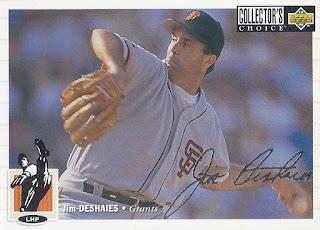 Wiki-facts: "In 2001, Deshaies ran a tongue-in-cheek campaign urging Baseball Writers Association of America voters to elect him to the Baseball Hall of Fame, even though he knew that he was not qualified for the honor. His goal was to get one vote in the Hall of Fame election, which succeeded when Houston Chronicle writer John Lopez voted for him."

Birthday boy: June 23, 1960. Another former MLBer, John Rabb, was also born that day. Doug Rogers, who bounced around the NFL in the early/mid 90s, also claims that day. Finally, on 6/23/1960, Enovid, the first oral contraceptive (aka: the Pill) hit the market. That's quite a contrast to this section of the recap.

Up Next: 92 - Delino DeShields

Posted by buckstorecards at 07:52