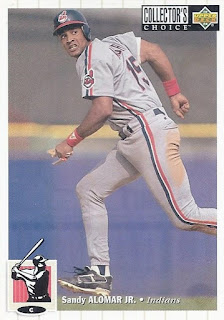 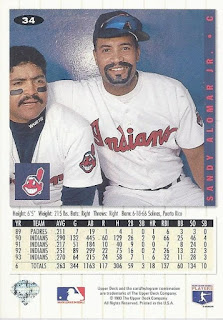 Front photo: Perhaps he should be watching where he's running.

Back photo: Hanging out in the dugout.

Better photo?: This one is really close. The dugout shot is so Collector's Choice-ish, but the facial expression is so great on the front, I have to give it to the front.

Ties to my personal collections: Would go on to play a few games with the Mets at the end of his career, but never got any cards out of it.

Wiki-facts: Is in the Cleveland Indians Hall of Fame.

Google it: If you have 1.43 million sitting around, you can buy his house.

Birthday boy: June 18, 1966. Nobody in baseball or basketball reference has their birth on that exact date. In fact, only 6 NBA alum at all were born on June 18th, although one was HOFer George Mikan. NHL veteran Doug Bodger does match exactly. In football, Rodney Rice, who had a couple seasons with the Pats and Bucs, is also a 6-18-66 baby. Figure skater Kurt Browning matches up as well.

Email ThisBlogThis!Share to TwitterShare to FacebookShare to Pinterest
Labels: Indians