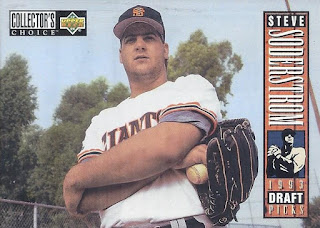 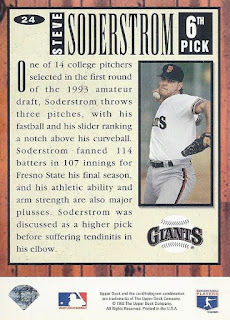 Front photo: Posed  photo, but at least you get some scenery in the background.

Back photo: Unless that ballpark has a fence within a few paces of the mound, I'll call this one posed as well.

Better photo?: Trees in the background are always nice. The front.

Ties to my personal collections: Was originally drafted by the Mets in 1990 in the 15th round. Didn't sign with them.

Wiki-facts:  He currently runs a baseball teaching facility in Turlock, CA. Only had 3 big league appearances, all starts, going 2-0 with an ERA of 5.27 in 1996.

Google it: He's actually the co-owner of the Backyard Sports Academy.

Birthday boy: April 3, 1972. Matches up with nobody on any of the team sports reference sites. but does match up with former tennis player Sandrine Testud, who has 3 singles championships and was ranked #9 in the world at one point. In Hollywood, actresses Jennie Garth (90210) and Leigh-Allyn Baker (Will & Grace) were also born that date.